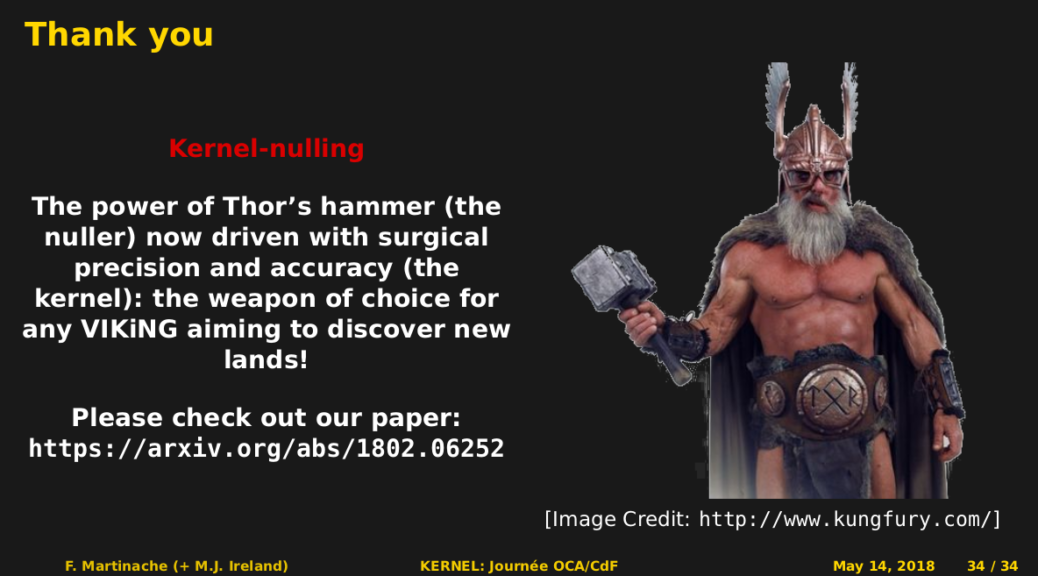 It is my great pleasure to be able announce that the paper Mike Ireland (ANU) and I wrote, entitled “Kernel-nulling for a robust direct interferometric detection of extrasolar planets” has been accepted for publication by Astronomy & Astrophysics.

The paper introduces a baseline class of nulling-interferometers producing outputs that can be robustly calibrated. These new observable quantities exhibit properties that are similar to closure- and kernel-phase, while taking advantage of the use of a true nulling stage. The first version of our paper had been previously announced. The (updated) preprint of the paper is now available on arXiv.

It is fantastic to have this piece accepted: the quest for robust high-contrast solutions has been on my mind for a while… And now that we know that at least one solution exists, surely others must do too!

These are the slides of a presentation given on March 8, 2018 at IPAG, where I present research activities related to the KERNEL project, in particular the most recent development concerning the idea of kernel-nulling interferometry.

Combining the resolving power of long-baseline interferometry with the high-dynamic range capability of nulling still remains the only technique that can directly sense the presence of structures in the innermost regions of extrasolar planetary systems. Ultimately, the performance of any nuller architecture is constrained by the partial resolution of the on-axis star whose light it attempts to cancel out, and the design of nullers focuses on increasing the order of the extinction to reduce the sensitivity to this effect. However from the ground, the effective performance of nulling is dominated by residual time-varying instrumental phase errors that keep the instrument off the null. This is similar to what happens with high-contrast imaging, and is what we aim to ameliorate. We introduce a modified nuller architecture that enables the extraction of information that is robust against piston excursions. Our method generalizes the concept of kernel, now applied to the outputs of the modified nuller so as to make them robust to second order pupil phase error. We present the general method to determine these kernel-outputs and highlight the benefits of this novel approach. We present the properties of VIKiNG: the VLTI Infrared Kernel NullinG, an instrument concept within the Hi-5 framework for the 4-UT VLTI infrastructure that takes advantage of the proposed architecture, to produce three self-calibrating nulled outputs. Stabilized by a fringe-tracker that would bring piston-excursions down to 50 nm, this instrument would be able to directly detect more than a dozen extrasolar planets so-far detected by radial velocity only, as well as many hot transiting planets and a significant number of very young exoplanets.

These videos are part of Section 2 of the on-line course “Eagle Eye Astronomy”, initially released on France Université Numérique. These have recently been re-uploaded on youtube and close-captioned, to help better understand the audio track despite the French accent.

Turn the constraint of diffraction into an advantage: the interferometric trick

Stars are not lasers: a better model for ordinary light sources

A finite spectral bandwidth results in some spectral decorrelation of the electric field emanating from a source: even with a true point source, you will only observe the interference phenomenon (mutual coherence of the field) over a finite range of optical path difference (OPD) that is constrained by the coherence length.

An purely monochromatic and phase-calibrated signal like the one coming out of a very good laser would exhibit an infinite coherence length, represented by the green curve plotted below.

Change the bandpass of the filter (here expressed as 1/R=Δλ/λ) to see its effect on the coherence length (the blue curve).

For a given bandpass (say 0.05 and 0.1), how many fringes can you make out in the fringe packet? How do the two quantities (bandpass, number of fringes) relate to each other?

This tool was developed as a part of the on-line course Eagle Eye Astronomy, hosted on the France Université Numérique website.

This post features a pretty fun simulation tool that will allow you to experience “by hand” the relation between the geometry of an interferometric array (that is the location of the telescopes or apertures making up the array) and the corresponding so called “uv-coverage”, that shows all the spatial frequencies the interferometric array gives access to.

This tool was developed as a part of the on-line course Eagle Eye Astronomy, hosted on the France Université Numérique website.