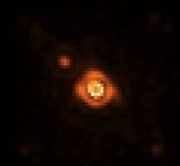 Example of image of a binary M-Dwarf system known as GJ 623, observed with the adaptive optics (AO) system at the Palomar Hale Telescope. In this image, the main star and its companion are well resolved and both fairly bright. An Earth-like planet in this system would be so faint in comparison that it would be completely invisible in this picture.

The invention of the telescope, almost exactly 400 years ago, marked the beginning of modern astronomy. Since then, a deep connection has run between, on the one hand, the science and what we learn from the study of the heavens, and on the other hand, the observatories and instruments required to perform these observations. Often, the science has driven the development of improved instrumentation: it is for example steady work on the stabilization of high resolution spectrographs has made it possible to measure long term low amplitude RV signals, required to detect extrasolar planets. Sometimes however, observational breakthroughs have happened because of astute instrumental developments: Michelson’s stellar interferometer, Lyot’s coronagraph or Labeyrie’s speckle interferometry; each of these have, in their time, opened the door to entirely new areas of science, by offering a new entry into previously unexplored regions of the 4D parameter space: position, wavelength and time (α, δ λ and t).

One of the most outstanding developments of recent years, is the deployment of adaptive optics (AO) on large telescopes, that changed observations from seeing limited to diffraction limited. The consequences of this technique go well beyond the straightforward obtention of sharper images: it makes conventional instrumentation like imagers and spectrographs more efficient, and enables the use of new techniques, like stellar coronagraphy. One of its most exciting prospects of this technique remains the obtention of direct images of extrasolar planets, an ambitious scientific objective which has motivated most of my work on astronomical instrumentation.

While the field of extrasolar planet search has so far been dominated by indirect detection methods: radial velocity, photometric transits and microlensing events, the last few years have finally witnessed the production of direct images of alien worlds, starting with the planetary mass companion orbiting the brown-dwarf 2M1207, and more recently, planetary candidates around Beta Pictoris, HR8799 and Fomalhaut. Naturally following the discovery of each new extrasolar world comes the thrilling question of the possibility of it harboring life. The large number of exoplanet candidates announced by Kepler indeed suggest that rocky “Earth-like” planets are very numerous. The direct detection of planets in the habitable zone, even on nearby stars (30 parsecs) however remains a technical challenge, as angular separations range from ten to a few hundreds of milli-arc seconds, a limit that is dangerously close to the fundamental limit of diffraction of most existing visible/IR telescopes. My research is focused on the development of high angular resolution instrumentation and techniques that expand the extrasolar planet discovery space toward high contrast and small angular separation; as well as on the interpretation of the often unique data that is produced in the process. The products of such observations include the characterization of a wide range of low-mass objects in multiple systems: cold stars, brown dwarfs and of course, extrasolar planets. Direct imaging of extrasolar planets orbiting main sequence stars requires high-contrast, of the order of 105-106 in the near infrared for young Jovians, and all the way up to 1010 in the visible for Earth-like planets, and this, at the diffraction limit.

To tackle this dual contrast/angular resolution challenge, two families of complementary techniques are being used: coronagraphy and interferometry, the study and use of which I actively pursue.